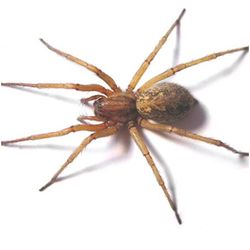 The abdomen is unsegmented and holds the spinneret. The harvestman or daddy-long-legs spider differs in that its abdomen is segmented.

Spiders feed on other insects and are generally thought of as beneficial. However, a vast majority of people are uncomfortable with spiders being around them.

Spiders are generally found outdoors. They are often brought indoors on firewood, laundry and flowers. They can often be found around windows or around outdoor lighting since other insects are attracted to these areas.

Inside spiders are found year round, but are most prevalent during warm months. Outside adult spiders will die in cold months, but the young will over-winter in a dormant state.

Two species of spiders are considered to be dangerous to humans. They are the black widow and the brown recluse. These spiders are basically native to the United States, and very seldom are found in Canada. If bitten by these spiders you should receive immediate medical attention.

Preventing house spiders can be a very difficult task due to their naturally shy and elusive tendencies.

We look forward to helping you with any of your residential or commercial pest control needs!